Some people think it’s one of the weirdest books ever published. An art book unlike any other art book. A unique and disturbing surreal parody. Grotesque and beautiful. It’s very hard to describe. Codex Seraphinianus by Italian artist Luigi Serafini is a window on a bizarre fantasy world complete with its own unique (unreadable) alphabet and numerous illustrations that borrow from the modern age but veer into the extremely unusual. It was first published in two volumes by Franco Maria Ricci in 1981. The pictures in this AbeBooks article are from the 1983 American edition published by Abbeville – 370 pages of the Twilight Zone. There is also a 1993 single volume edition and a recent 2006 edition published byRizzoli.

Created in the late 1970s, the book’s blurb on the cover flap talks about Codex Seraphinianus being a book for the “age of information” where coding and de-coding messages is increasingly important in genetics, computer science and literary criticism. “The Codex presents the creative vision of this time…” goes on the blurb. If Serafini was so influenced by “information” in the 1970s to create this maverick art book, then what must he make of today’s information age? Codex Seraphinianus Covers featuring Facebook, Twitter, blogs and Google? Countless websites and blogs can be found pondering the meaning of Codex Seraphinianus or simply admiring a truly original piece of art/fantasy/imagination – call it what you will.The cover alone is worth studying. 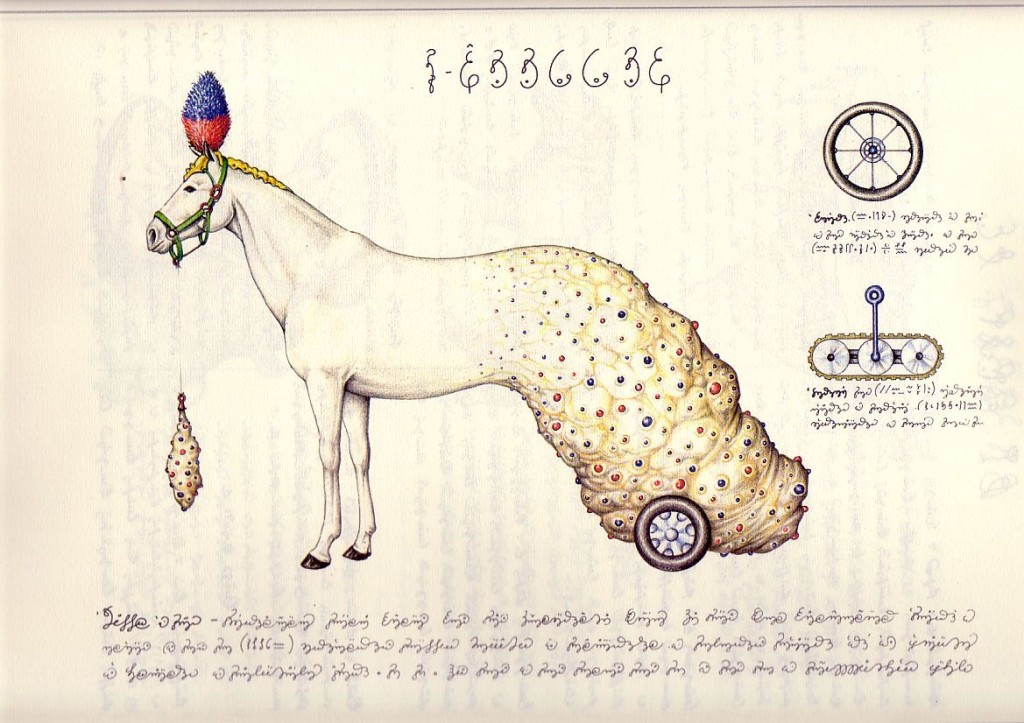 The 1991 Abbeville edition features a couple having sex and being transformed into a crocodile. Shakespeare described sex as the “beast with two backs” but Serafini is operating on a different level to the Bard. The 1993 edition uses a different image for its cover – a man in very unpractical headwear appears to be riding a llama, which has an impressive set of antlers.They are both staring into a mirror outside a stone building that appears to be offering some sort of brightly colored food. Both covers are strange but the crocodile sex image is more disturbing.Essentially an encyclopedia about an alien world that clearly reflects our own, each chapter appears to deal with key facets of this surreal place, including flora, fauna, science, machines, games and architecture. It’s difficult to be exact because no-one has ever understood the contents page.

Elements of today’s world are visible but they are nearly always given some surreal twist – floating flowers, a peeled banana containing pills, a strange car covered in flies, clothing that would seem strange even in the 1970s, a man wearing roller-skates – with a fountain pen’s nib instead of a hand – stabbed through the chest with a pen, and lots of biped creatures with human legs attached to all manner of crazy things. 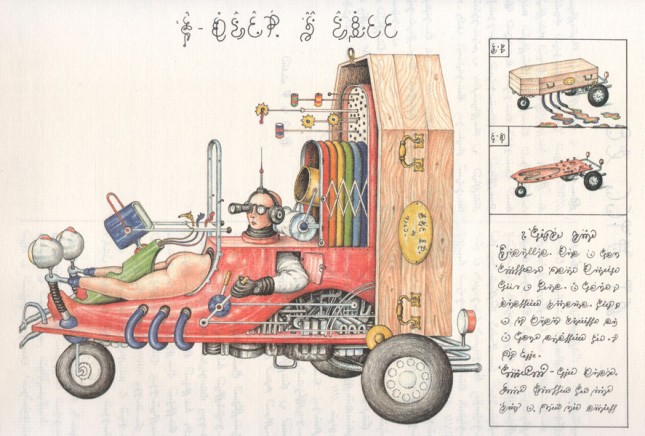 Artists have studied the book’s illustrations, philosophers have pondered the book’s meaning, codebreakers have tried (unsuccessfully) to decipher the text (although the numbers are now understood apparently), science fiction and fantasy fans have embraced it, and academics have tried to classify the book. Collectors just like to own it – an invaluable tool for making house-guests slightly uneasy. 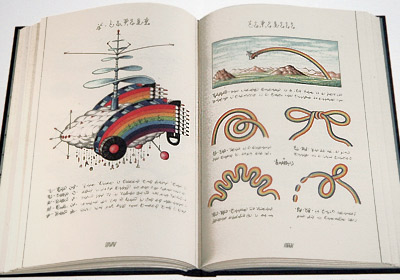 The following are a list of links for those interested in learning more about the Codex Seraphinianus, and reading what others are saying about it.

An article on the glyphs by Tomi Melka and Jeffrey C. Stanley in Writing Systems Research (purchase from Taylor & Francis)

An article by Justin Taylor: http://www.believermag.com/issues/200705/?read=article_taylor

An attempt at translation, although a bit of a long stretch by James M. Duyer: http://www.event12.com/seraphinianus/codex/index.html

An article by John Coulthart http://www.johncoulthart.com/feuilleton/writings/another-green-world-the-codex-seraphinianus/

My article (tongue in cheek): http://scriptjr.nl/issues/2.1/on-the-codex-seraphinianus-kane-x-faucher.php